The Pyrenean Shepherd  is a natural breed

The Pyrenean Shepherd (Berger des Pyrénées) is in opposite to the artificial made breeds – like for example the Dobermann od the Eurasier – a breed, which developed over the centuries: less by humans than more by the mountainous landscape of the Pyrenees and the original purpose of use, the mostly independently herding, for example herds of sheeps but also mixed herds of horses, goats, pigs and sheeps. To deal with this work in the high mountains, a sheepdog needs a high degree of intelligence, self-will and foresight, courage and energy. The race takes these natural dispositions in themselves, which should first lead the breeder in his breeding program and afterwards should be respected by the owner of the puppy. 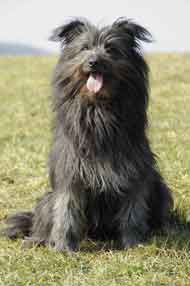 If we support you now with some informations about the Berger des Pyrénées (say: Bärschee dee Pireenee) we always have to talk in the plural about Bergers! Because our club supports two breeds, which are both named for your confusion Pyrenean Shepherd .  To make the orientation easier for you, here the basic classification: There are two breeds with two variants.

The Pyrenean Shepherd is a various breed

The two races differ in several important areas: in the header structure of the long hair is triangular, because the mouth is shorter in height, at the withers height, the cbp-breeders strive for the long hair a core range between 40 and 46 cm, and for the short hair a range between 46 cm and 54 cm.

The Pyrenean Shepherd  is an intelligent breed

Although l the two breeds may be crossed together in our club, but the Breeders strive to make a clear separation. Both races are equipped with a high work intelligence, whereas the short hair even has a higher obedience intelligence, because it is less specific onto herding . That’s why he is among athletes (Agility, Obedience) ivery popular.

The Pyrenean Shepherd  is a dog that has a minimum size and weight and maximum energy. His face has a unique crafty, intelligent and clever expression. The triangular shape of the head and the clever, curious eyes support this sympathetic impression.

That our Bergers are looking so “cute” , strangers often tempted to approach the dog spontaneously out to pet him. But the race behaves towards strangers quite often hesitant and suspicious – here, of course, education and training of the puppy also play a major role, so you can reduce the mistrust and make the dog more sociable.

But as an owner of Berger’s you need to life with the circumstance that foreigners call the dog a “cowards” just because he can not always be touched or because he evades her overtures. And you must expect that a Berger rejects also to intense expressions of sympathy of strangers by growling. The own family  he loves passionately. For children, home and garden, it is a reliable guard. 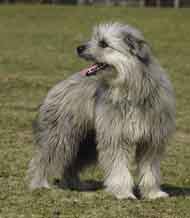 Even he needs so much love in the house, so lively, enthusiastic and enterprising, he is on walks. His needs to move one must concede daily enough space to complete, especially, the Berger mental exercises, such as Skill training, retrieving, etc. Otherwise the Berger will use the excess energy to do stupid strikes at the house; and also the initiative of the Berger must be dominated by the whole family, so he does not take the leadership out of sheer sense of responsibility for his “flock”.

The Pyrenean Shepherd is a tough breed

The original home of this breed are the alpine regions of the French Pyrenees. In our club, the original purpose of the breed will be reviewed by the breeders again by tests on sheep flocks.

And not because of the Berger still works as a sheepdog, but rather because his job intelligence and his particular predisposition to herd makes him a obsessive workaholic, and he can be inspired with fiery zeal for a variety of tasks: in Switzerland and in Germany, for example, Pyrenean Sheepdogs are trained to successfully rescue dogs.

The amazing intelligence of the Pyrenean Shepherd  is to be lead with much love, but also with much consistency. He is confident and capable of learning, he would make for his master basically everything right, at the other side he will take advantage of any flexibility by his family for himselve.

And not because of the Berger still works as a sheepdog, but rather because
his job intelligence and his particular predisposition to herd makes him a
obsessive workaholic, and he can be inspired with fiery zeal for a variety
of tasks: in Switzerland and in Germany, for example, Pyrenean Sheepdogs are
trained to successfully rescue dogs.
The amazing intelligence of the Berger des Pyrenees is to be lead with much
love, but also with much consistency. He is confident and capable of
learning, he would make for his master basically everything right, at the
other side he will take advantage of any flexibility by his family for
himselve. .

Here it is essential, from puppy age on to set the course properly through consistent training, stake out the limits: and that means that you should only give a command when you know beforehand that it may be enforceable.

Then you have to insist also with the utmost consequence to the execution of this command. Gives you the puppy once the execution, he remembers only that he basically does not obey commands. With a well trained dog you certainly can be five times straight, gut with a puppy never! 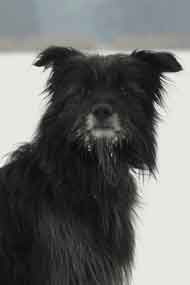 The care of the Pyrenean Shepherd is not very complicated. He is a robust dog who becomes ill very seldom and easily reach the age of thirteen and more years. Due to its small body size, he requires much less food as desired by the feed manufacturer, and he claims only little space in the apartment and car. But he wants to be everywhere. Berger is as a single dog in a family absolutely not a “kennel dog” because he seeks and needs the intensive contact with his family.

His grooming differs somewhat on the type of texture, but is done as a surface treatment with a few brush strokes per week. Additionally, one should pay attention to small mats behind the ears and elbows, which must be combed. Once a year the Pyrenean sheepdog is combed thoroughly, then no villus may remain in the coat. Even if need for grooming as such does not require much time, you should still scan each day’s the Berger from head to tail, while often call his name: By doing this you have  a good control of foreign bodies in the skin and also about the dog, which  becomes accustomed from childhood to be touched to your needs.